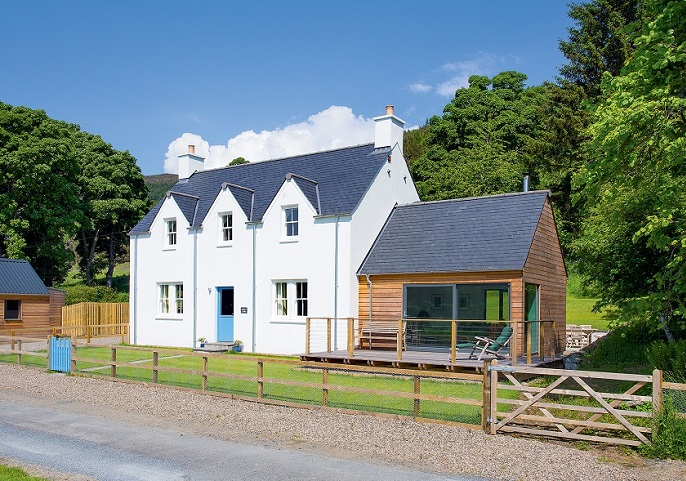 In the early 2000s, Lucy Holt decided to return to Straloch, where she grew up, to help her mother manage the family estate.

Purchased in 1969, when Lucy’s mother’s late husband was working as an estate manager for several landowners nearby, Straloch comprises 3,000 acres and several properties – although it’s fairly modest in comparison to other Victorian-era Highland holdings.

The multi-generational settlement includes a converted dairy, which Lucy moved into with her husband and children in 2006. Her mother resides in the main Straloch House, which was built in 1912, whilst her brother also lives and works on the land, tending to forestry and fencing.

But running the estate had become expensive, so Lucy was keen to find a new income stream. “We’d already decided that we could no longer farm the land, and we knew our best assets were the stunning scenery and abundant wildlife,” says Lucy. “Tourism seemed like the obvious route forward.”

It wasn’t long before Lucy realised that repurposing some of the older buildings on the site into holiday accommodation could provide a realistic way to ensure the estate’s survival. There were two prime candidates: The Old Lodge and the smaller property next to it, Keeper’s Cottage, both of which were built in 1842.

The Old Lodge had been the principal dwelling on the estate before Straloch House was constructed. Original features included elegant mantelpieces and a turned staircase. Sadly, the building was riddled with woodworm and the roof was condemned in the 1990s. From that point onwards, it lay empty for years while Lucy and her mother pondered what they wanted to do with it.

“We had several surveyors and architects look at it. While one or two recommended refurbishing the house, most firmly agreed that demolishing and starting again from scratch was the best option,” says Lucy.

The renovation cost of The Old Lodge was estimated at a minimum of £330,000, plus professional fees. “When we were informed that all the window lintels would need replacing as well, we realised the only elements we would be left with of the original building were the outside walls. That was the final straw,” she says.

At first, Lucy was daunted by the idea of constructing a new house, but she ultimately knew there was little choice but to go through with the demolish and rebuild scheme – despite the dwelling’s interesting history.

“We mulled over the decision thoroughly, but in the end the cost of renovating didn’t stack up. Plus, most of the architects and surveyors who’d looked at it had said that a new build would require very little maintenance compared to The Old Lodge.”

Lucy began researching companies that could take her project forward, and soon came across Heb Homes. “I was drawn to them instantly,” she says. “They take their inspiration from rural buildings in the Scottish vernacular – agricultural structures, longhouses and crofts.” Having done her homework, Lucy knew a kit house could offer an affordable route to a home that could be erected swiftly.

Lucy was keen to develop a property that would sit comfortably within the picturesque Highlands landscape, at the same time as complementing Keeper’s Cottage next door.

She was instantly attracted to Heb Homes’ White House design, although she did make some tweaks to ensure the new dwelling would respond sympathetically to the plot. “It was absolutely perfect, and almost identical to the building that was there originally,” she says.

As the house was going to be constructed using structural insulated panels (SIPs), it was essential for Lucy to finalise the design before work got underway on site so the shell could be engineered in Heb Homes’ workshop. One element she altered was to increase the ridge height of the dwelling in order to enhance the overall sense of spaciousness upstairs.

“This turned out to be completely unnecessary, as the structural panels are very slim and the resulting interiors are a lot roomier than you might expect,” says Lucy. She also decided to change the position of the extension-style zone in order to better capture the stunning vistas of the glen.

However, all of Lucy’s changes incurred extra time and expense. “I found the decision-making process quite difficult, and I really feared that I would get something wrong,” she says. “In retrospect, I should have trusted the professionals I was paying for.”

Once Lucy had settled on a design for the new house, she worked up a cost estimate for the scheme using Heb Homes’ online calculator. Keen to get things moving on site, she applied for planning consent before receiving the firm’s detailed cost breakdown for her tailored design. Unfortunately, progress hit a snag when the figure came back significantly higher than she had anticipated.

“Heb Homes do stress that their calculator is only a guide, and they advised me to get the project properly costed from the start, once the plans had been agreed,” says Lucy. With the renovation of Keeper’s Cottage already on her plate, Lucy decided to scale back the design of the new build by reducing the size of the house.

The designers at Heb Homes were hopeful that Lucy would not have to re-apply for planning permission, as the revised design looked identical from the front, but with a smaller overall footprint. “Unfortunately for us, Perth and Kinross council didn’t see it in quite the same way. We had to go through the process all over again, which set us back by another six months,” says Lucy.

As well as the extra local authority charge for re-submitting for planning consent, hefty professional fees started eating into Lucy’s budget. “I could have cut some of these costs by taking on more of the responsibility. For example, the professional designers handled the admin for the second planning application, which obviously bumped up their fee,” she says.

Lucy also paid a quantity surveyor to not only cost the project initially, but also to check the quality of the work at various intervals before authorising payment to the contractor.

When Lucy’s project finally broke ground, things on site progressed smoothly. “Rather than taking the scheme out to tender, I opted to use Heb Homes’ turnkey service, choosing one of their preferred contractors, Jim Cook,” says Lucy.

Having worked on plenty of the firm’s developments in the past, Jim and his skilled team of joiners and builders were able to get on with the project swiftly and encountered few problems along the way.

“Jim was extremely organised and efficient,” says Lucy. “Because most of the team lived on the west coast or the Isles, they often worked long 12-hour days in order to get the job done as quickly as possible.”

The foundations went in just before Christmas 2014 and the SIPs panels were erected a month later. “It was very cold and snowy throughout January, which caused all sorts of extra challenges – particularly with large vehicles requiring access to the site,” says Lucy.

However, thanks to Jim’s team of can-do professionals, work moved forwards in leaps and bounds and by mid-February the house had reached wind and watertight stage. Lucy found the swift assembly of the SIPs skeleton particularly impressive. “The process was very quick, and the units are so strong and well-insulated,” she says.

By the end of July, the house was totally finished. “If it wasn’t for the simultaneous renovation of Keeper’s Cottage, we probably would have completed in about May,” says Lucy. “I ended up really enjoying the construction process, and now I can see why good relationships are so important on this kind of project.”

As Lucy planned to rent the house out to tourists, establishing an interior scheme that was both stylish and cosy was at the top of her priority list. For the kitchen and bathrooms, she opted to use a local supplier recommended by Heb Homes.

“I’m a keen cook so I had strong ideas about how the kitchen should look,” says Lucy. “The detail required at the planning stage was immense – you need to decide where every plug socket and light should go well in advance.”

Lucy also knew this particular area of the house was likely to receive a lot of wear and tear from guests, so she invested in high-grade fittings.

“The sleek, good-quality cabinetry and simple styling of the German-made kitchen suited the space perfectly,” she says. “I specified an extremely hardwearing Silestone worktop, as I’d already decided not to skimp on the culinary zone and bathrooms. For me, it was important that everything was built to last.”

The semi open-plan layout gives the house an informal look, and engineered oak flooring has been laid throughout to create a warm, characterful appeal. “I employed a local interior designer, Tyrella Nash, to help out with the decor. She was clever with the budget, and the result is exactly what I wanted – a hint of the Highlands,” says Lucy. “The colours and fabrics reflect the landscape.”

The garden presented another challenge. “By the end of the building work, all that was left was just a huge mound of earth,” says Lucy. “I knew I wanted flat areas for children to play on rather than a gradual slope, and we’ve achieved that by introducing the terracing. My mum was a huge help in putting this together.”

There’s no looking back for Lucy, who is delighted with the result of her first self-build project. “My favourite part of the new house, called Stalker’s Lodge, is the extension, which offers a mesmerising outlook,” she says. “It couldn’t be cosier than on a winter’s day with the fire on, or during the warm summer months when you can slide back the doors that lead out to the deck. Guests love it, and so do I.”

This article by Alison Gibb first appeared in Buildit Magazine in May 2018.