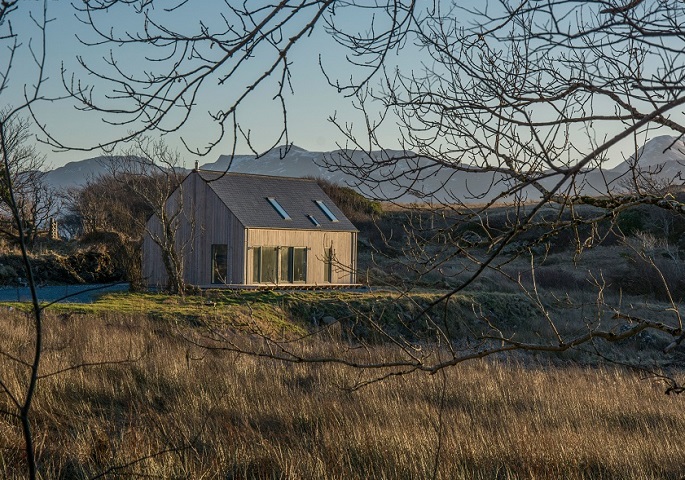 Timber-Clad SIPs Home on The Isle of Skye

For Donald MacKinnon and his wife Sarah, fond childhood memories of summers spent on the Isle of Skye prompted the couple to self build a home on the family’s croft.

Stunning coastlines, picturesque scenes of cattle grazing, narrow lochs – just some of the idyllic visuals that come to mind when you picture the Isle of Skye.

Before the days of technology, the promise of a summer adventure here would have been every child’s dream; and this was certainly the case for Donald MacKinnon, who has very fond memories of visiting this Scottish island.

“My father was brought up here, as were my grandparents, so I always remember visiting on school holidays,” he says. “When my wife and I were first married we also lived on the island for some years, so it’s always been a location close to my heart. It’s a place with many happy memories for both of us.”

For several years, Donald and his wife Sarah had spoken about the prospect of building their own home. So when they inherited the family’s croft it made perfect sense to accelerate their plans.

“My parents are getting older and I wanted a base close to them that we could easily travel to from our home in Glasgow,” says Donald.

“We looked at several other areas and plots, but our family thought we’d be completely mad to choose another site. We were kindly gifted a plot on the croft and put our plans in motion.”

The building plot & a challenging area

Despite its prime location, the Isle of Skye poses some difficulties in terms of terrain and climate. The mountainous landscape and ferocious weather requires a certain breed of builder and therefore Donald was keen to use local specialists who were familiar with the conditions and challenges of the island.

“I wanted a company who were well versed in building homes on the Isle of Skye, and that’s when I came across HebHomes,” he says.

“The firm specialises in architect-designed kit houses and I was impressed by their portfolio. We worked together to come up with plans for a three-bedroom house, being especially conscious of how its appearance would blend seamlessly with the rural location.”

The house design was taken from the HebHomes Longhouse range.

The linear form allows the property to slot easily into the landscape, with the main glazing orientated to make full use of passive solar gain.

The standard Longhouse scheme aims to maximise living space, with the focal point being a double-height vaulted ceiling in the main living area that helps to create a stunning effect.

Donald and Sarah met with HebHomes architect Alasdair Stephen, who explained the benefits of a SIPs (structural insulated panels) build.

“Most people would naturally think to construct in timber frame, but the big benefit of SIPs is the speed in which a project can take shape,” says Alasdair.

“It can be wind and watertight really quickly, and with insulation being an integral part of the design, the building can be up in as little as seven days.

“Donald and Sarah were keen for us to deliver a full turnkey service. This route offers a hassle-free self build journey from start to finish.”

A lawyer by profession, Donald admits it would have been unrealistic to attempt to project manage the build himself.

By remortgaging their current home in Glasgow, the couple were fortunate to have enough in their budget to call upon the services of a quantity surveyor to coordinate the tenders and oversee the works.

“I’m a firm believer that, when funds allow, some things are best left to the professionals,” says Donald. “I often found myself weighing up cost vs hassle and I had no regrets about delegating the more time-consuming aspects of the process to others.”

Similarly, he enlisted Alasdair to navigate the design through planning – thankfully permission was granted with no issues or objections.

The building of the house was put out to tender through the quantity surveyor, and it transpired that the final project team all had some sort of previous experience with building on the Isle of Skye, which certainly helped to put the MacKinnons’ minds at ease. “We had a very reputable team,” says Donald.

Once the positioning on the croft had been set out, the builders began the excavation work.

Due to the nature of the land, rock breakers were required to create a level base for the foundations. Whilst this did take a little longer than expected, other elements such as laying the pipework were completed without any problems, so the team were back on schedule in no time.

The advantages of enlisting local building specialists were realised throughout; one occasion notably being the level of island knowledge when it came to choosing external materials.

The couple were considering white render cladding, but one of the team pointed out that the upkeep of a larch clad home was considerably less and weathered better. They opted to work with Russwood for this project.

Similarly, the pair nearly chose a tin roof, however were advised slate would be more hardwearing as well as more visually suited to the rural environment.

“We went into the process of self build a bit naive and hadn’t really explored all the construction methods available,” says Donald. “That said, when I grew to understand more about the concept of the SIPs system, I felt confident in its ability to perform. The design is contemporary, durable and extremely airtight, which is exactly what you need somewhere like the Isle of Skye.”

To complement the excellent thermal performance of the home and further reduce its environmental impact in use, the couple was keen to employ energy-efficient heating systems throughout.

An air source heat pump and mechanical ventilation and heat recovery (MVHR) system were installed to ensure it remained a low-energy-use property and Donald and Sarah have noticed a difference in comparison to their Glasgow home.

“Even in winter, the house is heated quickly,” says Donald. “There’s nothing better than hearing
a gale-force wind and then seeing the rain lashing down at the windows where you’re warm and snug indoors. It’s very relaxing.”

For Donald, looking out through the wide panes of glass in the couple’s new dwelling is the most rewarding result of the build.

“Come rain or shine, the panoramic views from the glass frontage bring in light and make the house seem far more spacious,” he says. “I’m so glad we chose to invest in the expansive glazing as it forever reminds us of the property’s prime and breathtaking location.”

The pair did not have to give much thought to a garden because, with acres of croftland, the unspoilt setting demanded nothing more than a small patch of decking off the main living area and master bedroom on the ground floor.

At any rate, the terrain makes the creation of a well-manicured landscape quite difficult.

While there are many advantages to living in such a remote part of the world, for Donald and Sarah, this was a challenging factor.

“After speaking to several other self builders in the local area, I had managed to get a rough idea of our project’s budget and generally all the works were completed within their estimates,” says Donald.

“Yet when it came to connecting services we were astounded by the cost – it was wildly more than what we had anticipated. And what’s more, this part of the project was left entirely down to us; it turned out to be a very expensive, time-consuming process.”

With the house now finished, Donald thinks that he would do it all again, but perhaps as a property development venture.

“I have no regrets about the build itself as it was all done to a top quality specification. As a family we’re all immensely proud of what has been achieved,” he says.

“That said, snagging took a long time to deal with and there were moments when I wish I had used a professional – to organise the kitchen and bathroom, for instance. It would have been easier for the builder to coordinate the purchase and delivery of these and for us to forfeit the 15% surcharge for peace of mind.”

The couple initially had thoughts about letting out the new house, but the personal touches added to the home have encouraged them to keep the home private.

“The build has brought us all closer together,” says Donald. “Our children, who are in their teens, don’t want to spend the weekend overnight at their grandparents anymore and this home allows them to have their own space. My siblings can use the house whenever they want to visit, too, so as an extended family it’s opened up so many opportunities.”