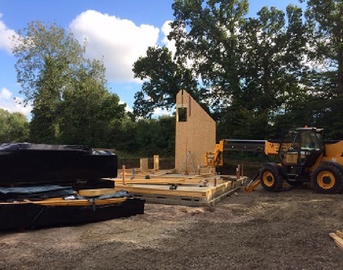 Two large WH602 designs are underway at Crawley near Gatwick.  Erection is going smoothly and comes shortly after the successful completion to wind and weathertight stage of a LH502 in East Sussex.

Commenting, HebHomes director Alasdair Stephen said, "We are delighted that our designs are becoming increasingly popular in England.  The style is well suited to almost all rural location and many urban ones.  The whitehouses being built in Crawley are a great example of this.'

Hebhomes designs were originally developed for the west of Scotland but their simple form is finding favour with the public and planners alike across the UK and Ireland.