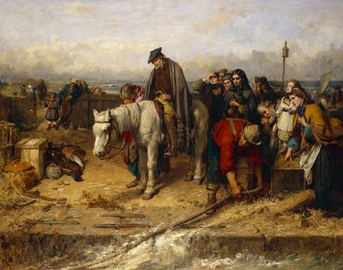 Hebhomes director Alasdair Stephen has helped kickstart a debate on the rural housing crisis in Scotland after posting a Facebook comment followed by an article in the West Highland Free Press, a radical paper based on the Isle of Skye.

His article is reproduced in full below:

On Saturday evening I met the contractor who built my house on Skye 20 years ago. I pressed him for two figures:  How much would that house cost to build now to the same specification?  £150,000 he replied.  How much to meet modern building regulations?  £250,000.

The next morning this was the basis of my ‘update’ on Facebook. I contrasted this with the costs of my house 20 years ago. Land valued at £9,000. Construction cost of £35,000.  A Rural Home Ownership grant from the government covering a third of my costs.  My contribution; £22,000.  That was two and a half time my income – the expectation at the time as to what the limit of your mortgage should be.

I outlined the consequences of such arithmetic.   Young people leaving.  Schools losing children.  Young people being internally displaced on Lewis to find accommodation in Stornoway.  Communities and Gaelic dying.

The reaction to the post was telling. Almost immediately it went viral.  By the next day it had been shared 500 times, liked 1,200 with hundreds of comments. It had revealed an anger and a sadness from the younger generation.  They wanted to stay in their communities.  They wanted to have jobs and families and homes.  But that chance was not there for them.

The situation is worse than the bald numbers suggest. Self-build mortgages for young people who – as they often did in the past – construct their own houses with their own labour, help from friends and favours from local tradesmen – have almost disappeared.  Even if you have family land from a croft, the figures still make it almost impossible to build.  Areas like Lewis are in a worse predicament than Skye. Land may be more expensive on Skye but house values are much higher.  Build on Lewis and you are immediately into huge negative equity. What bank will lend on that basis?

The housing situation is therefore grim. But if it is solved the rural economy could be utterly transformed. Why?  The simple answer is the IT revolution and tourism.

This summer saw a record numbers of tourists flocking to Skye and across the Highland and islands. There are countless opportunities for small businesses to be set up and offer high end tourism experiences.

The best people to do this are the locals within the crofting communities. A few years ago, I remember the Highlands came second to Norway as the best tourist destination in the world in a Lonely Planet survey. What marked the Highlands down?  People wanted to hear Gaelic.  They wanted to see crofting. They wanted traditional music in pubs.  The wanted to interact with real local life.  This cultural tourism could transform the Western Isles especially.  There is a huge market waiting to be tapped.  But who will exploit it if the young cannot build their own homes let alone build their own businesses?

Likewise, the Highlands and island should be given broadband. Not mediocre broadband but the internet as fast as London, Hong Kong or Singapore.  This infrastructure investment is more important than any new road, bridge, ferry or airport.  Countless businesses could be established and could thrive providing a mind-boggling range of services.  Ok, the petrol is more expensive, as is the local shop.  The roads are not very good but you are living in the most beautiful place on earth!    But again, to do this there needs to be access to housing, not just for the business owner, but also for staff.

Because I built my house 20 years ago I could start a business with my brother. It now employs 20 people. We are lucky enough to be able to rent an office at the Sabhal Mor Ostaig.  In the same building is Young Films.  A previously London based company that moved to Skye partly because they have access to super-fast broadband and talented graduates from the university.  An example for the rest of the Highlands.  But half of our staff are in Glasgow.  That is simply because of a lack of suitable housing on the island.

So what is to be done? First of all, vision and leadership is required from Nicola Sturgeon (this is not an issue for a junior Housing Minister).  The vision is the thriving, dynamic economy that could be created.  The leadership is in making it happen.  That is the difficult bit.  I have some ideas.

Firstly, the approach now and of the past will not work. There are lots of great people involved in charities, housing associations and cooperatives who have been working for years to provide social housing. It is scratching the surface.  This requires massive state intervention.

The government should build the biggest cross laminate timber (CLT) factory in the world. This new construction technique – houses built from a solid wood laminate made from the pine forests of the Highlands – will be an incredibly green form of construction.  It will also be a new industry for Scotland, linked to research at our best universities such as Napier, and one that will also transform the economics of forestry.  CLT kits should be modular and cutting edge, developed in tandem with changes in building regulations that will allow these to be built cost effectively, providing high quality, well designed housing.  The kits should be provided free to young people who qualify.  Local tradesmen and contractors can erect and complete.

The fundamental purpose behind crofting should be to keep people on the land and to allow communities to grow. If you are a crofter you should be obliged (or forced even) to provide a small plot of land for any family member who wants to stay.  Children at the local school are more important than sheep.  Likewise, a portion of common grazing in each township should be set aside for housing for the wider community. Younger brothers, older and younger sisters (as well as other locals) should not be denied the opportunity to build a home just because they did not inherit the croft.

Crofters should be given something very important in return. That is access to loans so they can diversify their crofts into tourism.  That could mean money to renovate blackhouses, or to build modern shielings – holiday homes on the crofts that can provide income and employment and an authentic cultural tourism experience for the visitor.  This will also take pressure off the existing housing stock, much of which is being used as holiday homes when it could be rented as family homes.

This is not a problem that will be addressed by devolving more power to local communities. It is not a problem that will be solved by giving more power to crofters and community councils. Unfortunately, people argue. They fall out and become unreasonable when it comes to housing.  This requires Big Government to say: “We are sorry, but a generation has been let down. We will not stand by and watch them betrayed any longer. These amazing young people that the Highlands produce every year should be given the chance to live, love and prosper in their own communities.  We will make it happen.”